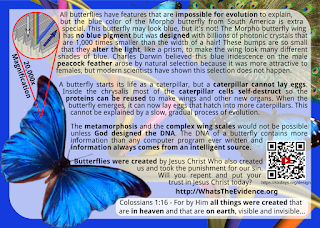 Posted by Profile at 6:30 PM No comments:

Compelling video about DNA and special creation by Jay Seegert on the Creation Today show: HERE
The more I learn, the more I ask myself, "Why are we not presented with this information in school?" Certainly this once more shows evidence for the impossibility of evolution.
Posted by Profile at 11:55 AM No comments:

Data storage technology has come a long way since punch cards. But the undisputed king of data density is still DNA. A team of scientists fit 70 billion copies of their genetics book—including page formatting instructions and images totaling 700 terabytes of data—into just one gram of DNA.
Harvard scientist George Church led this technological feat.1 The scientists first built a digital coding and decoding scheme whereby either of two of DNA's four chemical bases was designated "0," and either of the other two bases was designated "1." How could they successfully copy digital information of their choice, using zeroes and ones coded into DNA strands?
They used next-generation high-fidelity DNA microchips to print the DNA in 96 base-pair pieces. Sequencers then read each of those pieces, taken at random from a mixed pool. A computer reassembled the data into its proper order because the scientists engineered ID tag sequences every 19 base pairs. In the end, they "printed" billions of book copies in a fingernail-sized puddle of DNA.
There is no material that has as much data storage density as DNA. It is better than blue-ray discs, hard drives, and even flash drives. The Science report shows that DNA is six powers of ten denser than flash drive technology.
The sheer superiority of DNA as a data storage medium is strong evidence for its supernatural creation. This may even be one of the reasons why the 20th century's most prominent intellectual atheist, the late Antony Flew, confessed, "What I think the DNA material has done is show that intelligence must have been involved in getting these extraordinary diverse elements together."2

Reference
* Mr. Thomas is Science Writer at the Institute for Creation Research.
Article posted on August 29, 2012.   http://www.icr.org/article/7012/
Posted by Profile at 6:58 AM No comments:

Beautiful Peacock Showing Us His Feathers

Posted by Profile at 8:46 AM No comments: 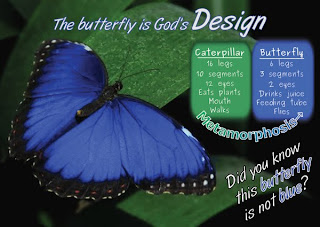 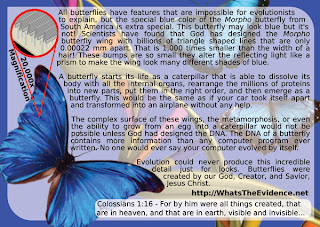 Credit for text and design: Randy Brandt-all rights reserved
Posted by Profile at 6:42 AM No comments:

The Butterfly is God's Design

The Morpho is a butterfly from South America that has some incredible design features. All butterflies have features that are impossible for evolutionists to explain, but the special blue color of the Morpho is extra special.

A butterfly starts its life as a caterpillar. When fully grown the caterpillar then for some reason attaches itself to a branch hanging upside down, covers itself with a chrysalis (protective covering), dissolves its body and all of its internal organs, rearranges the millions of cells into new structures, and then emerges from the chrysalis as a butterfly.

Some differences between a caterpillar and butterfly:

The ability to fly is no small task. An airplane uses the simple principal of lift to fly but a butterfly uses much more complex methods including wake capture, vortices at the wing edge, rotational mechanisms and 'clap-and-fling' mechanisms. No one has ever observed a non-flying creature develop the ability to fly, but if evolution is true then flight would have happened accidentally four times (in insects, birds, bats, and pterosaurs).

What makes the blue color of the Morpho special?

There is no blue color.

The picture you are looking at has blue in it but the butterfly does not. Researchers have found that this butterfly has no blue pigment on its wings. If you use a electron microscope and look at the wings of a Morpho you will notice thousands of rows of cones on every scale. These cones have ridges on them that are spaced 0.00022 mm apart. That is 1,000 times smaller than the width of a human hair. These rows are so straight that the maximum distance they go out of line are 0.00002 mm. No machine humans have ever made have this type of accuracy!

If two people hold a rope and shake the end up and down you will notice some of the waves cancel each other out. The ridges on this butterfly do the same thing with light. The ridges are spaced exactly far enough apart to reflect the blue light but cancel out the other colors. Evolution has no way to create beautiful structures just for looks. These wings were created to show the handy work of God.

The complex surface of these wings, the ability to fly, the transformation process, or even the ability to grow from an egg into a caterpillar would not be possible unless that egg had all the necessary information stored in its DNA. The DNA of a butterfly contains more information than any computer program ever written. No one would ever say your computer evolved by itself, and no one should ever say that a butterfly evolved either.

For I am not ashamed of the gospel of Christ: for it is the power of God unto salvation to every one that believeth; to the Jew first, and also to the Greek. For therein is the righteousness of God revealed from faith to faith: as it is written, The just shall live by faith. For the wrath of God is revealed from heaven against all ungodliness and unrighteousness of men, who hold the truth in unrighteousness; Because that which may be known of God is manifest in them; for God hath shewed it unto them. For the invisible things of him from the creation of the world are clearly seen, being understood by the things that are made, even his eternal power and Godhead; so that they are without excuse: Because that, when they knew God, they glorified him not as God, neither were thankful; but became vain in their imaginations, and their foolish heart was darkened. Professing themselves to be wise, they became fools, And changed the glory of the uncorruptible God into an image made like to corruptible man, and to birds, and fourfooted beasts, and creeping things. Wherefore God also gave them up to uncleanness through the lusts of their own hearts, to dishonour their own bodies between themselves: Who changed the truth of God into a lie, and worshipped and served the creature more than the Creator, who is blessed for ever. Amen.

Posted by Profile at 6:47 PM No comments:

The strikingly iridescent blue seen in some butterfly, beetle, and bird feathers is well-known and enjoyed by scientists and laymen alike. This is due to creatures (and some plants) reflecting or absorbing certain frequencies of light due to the external chemical composition of their body. In past decades, it has been realized that although the color of these structures is clearly and unusually blue—no blue pigment can be found!

The South American butterfly, Morpho rhetenor, has wings composed of extremely tiny scales like all members of the Lepidoptera. Biologists magnified scales of the upper wing surface 20,000 times and saw "a regular grid of precisely constructed wedge-shaped ridges spaced at intervals of about 0.00022 mm. This pattern is repeated so accurately that the maximum deviation is only 0.00002 mm. No earthly workshop specializing in miniaturization [nanotechnology], would be able to make one single wing scale with this required precision."1 Detailed investigation of other butterflies reveals iridescence due to "nanoscale structures that produce ultra-high reflectivity and narrow-band spectral purity."2

The beautiful colors of male peacock plumes are due to variations in the photonic lattices. These are found at the nanoscale level in the tiny barbules of the magnificent feathers.

Beetles of the genus Hoplia found in France have chitin sheets (a stiff polysaccharide) in the scales of its exocuticle.3 The light is reflected due to a sophisticated network of airspace and rods of chitin. The title of this particular article says it all, "Blue beetle has natural nanophotonic design." Creation scientists heartily agree and would add that the design they speak of means a Designer.

Sadly, we find once again that scientists ignore the clear case for creation and simply say that millions of years ago, "biological systems were using nanometer-scale architectures to produce striking optical effects."4 The two authors use the word "remarkable" several times to describe various photonic structures, but at the end of the article state that they have assembled themselves. This is hardly a scientific explanation, of course.

At the end of one article, the author says ". . . Nature may be able to teach scientists a new approach to the fabrication of technologically useful photonic structures."5 The creation scientist gives glory not to "Nature," but to the One true Creator. We can indeed learn from Him as we investigate His living creation.

* Frank Sherwin is a zoologist and seminar speaker for ICR.

http://www.icr.org/article/blue-t-ful-beetles-birds-n-butterflies/
Posted by Profile at 6:04 PM No comments:

Back to What's the Evidence